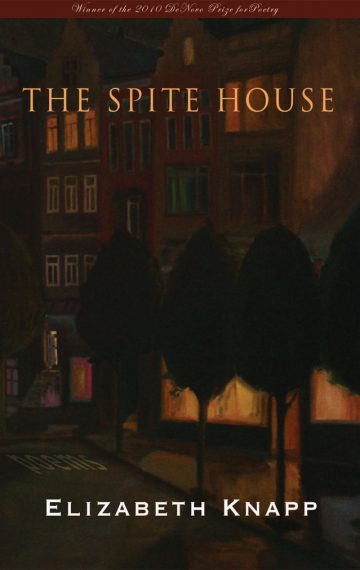 Buy from AmazonBuy from Barnes & NobleBuy from C&R Press

Praise for The Spite House

A major poet remakes the language, as Auden wrote, and in doing so remakes the world, and this is certainly what Elizabeth Knapp does magnificently in The Spite House. Knapp’s is a language filled with leaps and breathless connections that take us through history from the Bone Church in Kutná Hora to the Dead Sea, confronting crises that range from cutting down a tree to the sometimes unspeakable horrors that she finds a way to speak about. Here is a world remade to include an ever-expanding time and space where Charon might ferry us across Lake Como or Medusa visit Hawaii. It is a world where classical and cult figures blur to suggest to us just how much is at stake every moment of our lives. This is finally our own world seen freshly and fraught with dangers, but dealt with by a gifted poet who understands all too well that “even your own / thoughts will betray you,” and more, who can rise above the simple self so that she can say, “from that inmost fire, I carved myself.”

The Spite House is a book of dark vision and broad range, haunted by intimacy and anger, by a fierce fidelity to truth and to the elusiveness of truth, by emotional, spiritual, cultural, and political landscapes that are finally inseparable aspects of a single extended investigation. These pages’ season is late winter, when only a few rare swellings on the branches hint that change may come, even as an encasing ice glitters its own shard-sharp illuminations.

With a wry and sardonic intelligence, Elizabeth Knapp’s poems turn on themselves and on our notions of love and loss as the road toward salvation. But what if there is no salvation? In these poems, “carrying the blackened seeds of [her] heart,” the speaker is lost in a ghost world trying to sort false from true. As the poet wanders from ancient myth to pop culture, she creates a labyrinth of the lost, our lost world, where the line between the betrayed and the betrayer is blurred, and where the wandering never ends.