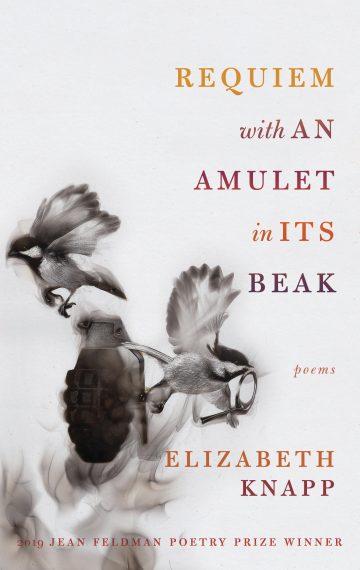 Buy from AmazonBuy from Barnes & Noble

Elizabeth Knapp’s poetry explores the intersections between modern society, personal mortality, and cultural immortality. In this, her second collection, celebrities come and go, while the collection’s patron saint, Emily Dickinson, presides over all. At its heart, this book is about loss and its endless reverberations, while at the same time, it embraces the notion of art as a kind of immortality. With these striking new poems, Knapp establishes herself as one of our most vital and compelling contemporary voices.

Requiem with an Amulet in Its Beak is a collection that simultaneously sings and jolts with poems that lithely move from the exterior to the interior life of middle-class America. On these pages, we meet the best and worst America offers—its traditions, its heroes, and its enemies—and we are charged with understanding each in a more complex light. As in the ending of Camus’s The Myth of Sisyphus in which “one must imagine Sisyphus happy,” this work masterfully finds hope in whatever dark beauty American culture offers.

From Koko the Gorilla to the ghosts of Kurt Cobain, David Bowie, and the ghosted culture left by Monica Lewinsky’s blue dress and Hillary Clinton’s woods, Elizabeth Knapp astounds us with her tonal range and tribal-American fluency. She is a high stylist and formal master, convincing us not so much of Baudrillard’s notion that “more and more information” leads to “less and less meaning,” but that more information forces us to excavate newer meanings: “we are living in the desert of the real, / where signs metastasize like cancer cells…” Her poems clatter, clang, and hurt—fiercely memorable in the “shopping cart” of our minds.

In Requiem with an Amulet in Its Beak, Elizabeth Knapp grapples with the ache of being alive, “the cleaving of new selfhood,” and the strangeness of our intimacies—between husband and wife, mother and child, the self and the I with which it speaks. Her series of “self-portraits”—as Kurt Cobain in drag, as Cindy Sherman’s Instagram account—speaks to the slipperiness of the self, and to its multiplicity. This is a book of yearning and questioning, and that is poetry.